Love Stories in Shades of Greene 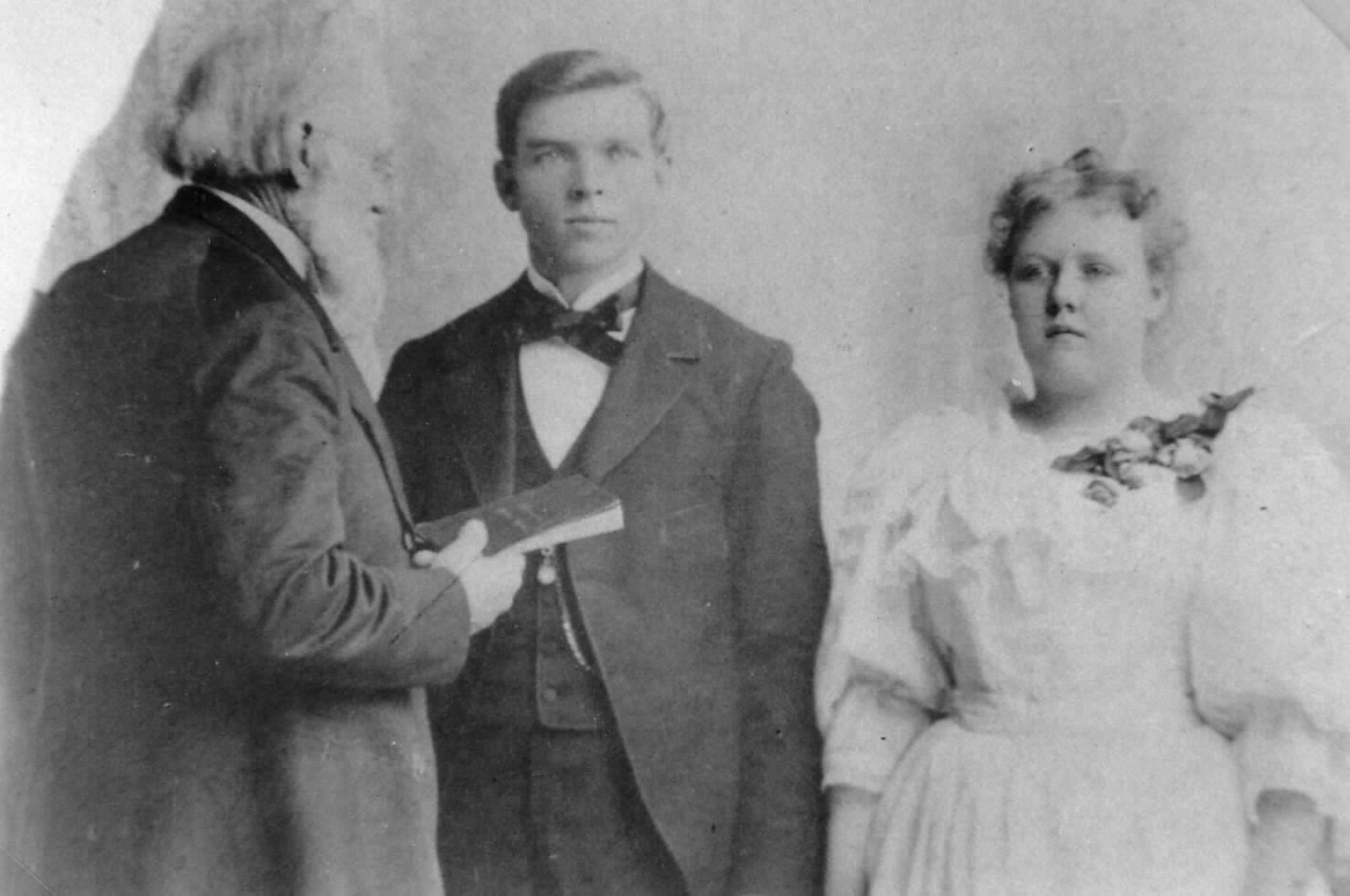 Here is an old favorite revived from our Greene Speak column series. Without their love stories, for better or worse, we would not be here today. Tell us, how did your ancestors meet?

Frances Cook was born in Greene County, Pennsylvania, in 1887, but moved as a young woman with her family to Columbiana, Ohio. Ties to Greene County remained strong. Frances returned often to visit friends and relatives. On one such occasion Frances sang with her hostess in the church choir. When John Madison Livingood caught sight of the musical guest, he turned to a friend and said, “I’m going to marry that girl.” (

They married 4 March 1914 in Columbiana, Ohio, then returned to Greene County to raise a beautiful family.

When They First Met

Joseph Warren Jacobs is best known for his Purple Martin birdhouses and the incredible ornithology research that took him to World Fairs and made him a household name among birdwatchers. The talent that first introduced him to his wife-to-be, however, was his handwriting. J. Warren was hired to compose beautiful entries in the family Bibles of local residents. One such employer was Jasper Dulaney, whose daughter Mary Emma first met J. Warren during this task for her family. A young girl at the time, it was some years later while Emma was helping her father at his grocery store in Waynesburg, that J. Warren really made an impression on her. When J. Warren walked into the store, Emma was literally taken aback by his good looks. She stumbled backwards and fell into a bushel basket. Fortunately, J. Warren was the one to help her up. This memorable encounter, now as two adults, resulted in a wedding on 24 March 1897.

Nineteen-year-old Sarah Elizabeth Bryan of Richhill Township, best known as Lizzie to her friends and family, was described as “a rather good looking, sprightly young woman.” In September 1871, she completed her coursework at Waynesburg College, becoming one of the school’s early female graduates. That same month, Lizzie attended the wedding of some friends, in the company of another Waynesburg College student, James Corbly Garard. Though Mr. Garard was not her father’s favorite suitor, Lizzie and Corbly stood up after their friends that day to make secret wedding vows before Rev. Campbell Jobes and the audience present. In those days, Pennsylvania did not require marriage licenses, so there was nothing to prevent or delay their nuptials. The ceremony kept quiet; Lizzie returned home to her father’s house.

Over the next several months, Silas Loller, a music professor at Waynesburg College, became a frequent caller at the Bryan home. Knowing no better and having the approval of her parents, Silas proposed to Lizzie, was accepted, and by April 1872 they were husband and wife. About two weeks after their wedding day, Silas and Lizzie were at her parents’ home, when they were called on by Mr. Garard. Lizzie’s father refused to let the young man in, but after several failed attempts, Corbly demanded his right to speak to his “lawfully wedded wife.” Only Lizzie was not shocked.

Silas immediately went to Waynesburg to seek legal counsel, but he found little relief. Lizzie’s “youth and impulsive nature” were blamed for her marriage to Corbly, which she alleged to be only a joke. The law failed to find the humor. Corbly and Lizzie were legally divorced 8 January 1877 by the Greene County court. Presumably, the Lollers were then legally remarried because they appear as a family in subsequent records and are buried together in the Bryan Cemetery in Center Township.

“Adams-Robinson December 10, 1876, in Beverly, Ohio, by Rev. Chapman, Mr. Robert Adams, of Leavenworth, Kas., to Miss Mary Robinson, of the former place….Robert is a son of Mr. Elijah Adams, steward of the Poor House, and the bride is a graduate of Waynesburg College, a bright and intelligent lady. Robert carries an empty coat sleeve, having lost an arm at Fredericksburg, but he now has two arms for the one he lost. May their arms never be less.”

Sadly, Mary did not live to celebrate her first wedding anniversary. Robert later remarried another Waynesburg College graduate, Martha Paull Wells, Class of 1871, with whom he rests in Arlington National Cemetery.

Roy Buchanan and Sara Livingood were classmates at Center Township Vocational High School in the early 1930s. During their junior or senior year, the class sold subscriptions to the Pittsburgh Post-Gazette, earning a trip to Pittsburgh. The day was very eventful, a tour of Heinz factory that included lunch, a visit to a music conservatory, a flower show, sightseeing at the recently constructed Cathedral of Learning at Pittsburgh University, and finally a movie called Mystery of the Wax Museum in which wax figures came to life. Despite the full schedule, Sara always told that the excitement really began on the ride home. The small country school had managed to provide two buses to transport the students between Rogersville and Pittsburgh. On the return trip the bus Roy was on broke down and the displaced students squeezed onto Sara’s bus. Sara consequently rode home sitting on Roy’s lap. According to Sara, they both “kinda liked it!” (

Listen) They graduated together in 1934 and were married in 1938 after Sara graduated from Waynesburg College.

Sarah Throckmorton [1836-1897] was the daughter of Morford Throckmorton [1792-1884] and his second wife, Nancy Simpson [1801-1869]. Morford was a blacksmith and farmer who migrated to Greene County from New Jersey as a young man around 1812. Sarah was the only one of Morford’s six daughters to graduate from Waynesburg College, though her younger sister Caroline did attend during the 1860/61 school year – an education which coincidentally ended at the same time that Sarah’s secret marriage was revealed. The rebellious attachment Sarah formed while at school is outlined in the family history:

“[Sarah Throckmorton] was a decidedly attractive girl of much more than ordinary intellectuality. Her laugh lay very near her lips, and to her keen sense of humor she added a gift of putting amusing things in words that made her merry company. Among her many ardent admirers was Joseph M. Milligan, a handsome, witty young student of Irish descent – courteous in manner, entertaining in conversation, a sweet singer, but poor in purse. They became engaged, but the engagement met with opposition from the young lady’s parents. So, they hied themselves to the Waynesburg M. E. Parsonage and were secretly married by Rev. M. J. Pierce, 15 August 1861. Several weeks later, during the minister’s vacation, two students glancing over his books discovered the marriage record and noised it abroad. Mrs. Throckmorton, while shopping in Waynesburg, heard the report and was properly scandalized. Hurrying home, the lively Sarah was promptly interviewed, and then and there received such a severe, old-fashioned Puritanic scolding that the memory lingered long, and surreptitious marriages were never popular among her descendants.”

After Joseph’s graduation in 1861, the couple moved to Washington County, Pennsylvania, and in 1869 to Afton, Iowa. Whatever the objections to Joseph were, he became a successful school administrator and lawyer. He and Sarah lived in Iowa until their deaths and raised five children.

Love Me as I Am

“Thomas Dale Watts, tall, dark wavy hair, brown eyes and the son of a preacher man, met Ruth Aldene Hughes, very attractive, blue eyes, beautiful smile and the stepdaughter of a farmer. It was love at first sight. He had brought his mother, Minnie to the farm to buy milk. Ruth was ironing and her mother Bertha told her to wash her face and comb her hair because the preacher’s wife and son had come. She told her mother, she really didn’t care, she wasn’t wanting to impress anyone. So, the story goes and the following December, they announced their engagement. On 26 June 1937 they were married in the Kuhntown Methodist Church. Dale’s father Rev. Watts solemnized a large wedding with several attendants, who had made their own gowns and bouquets.”

For more fun, scroll through the documents and photographs tagged WEDDING in the Greene Connections Archives.

← The House That Cyrus Built

4 Comments on “Love Stories in Shades of Greene”