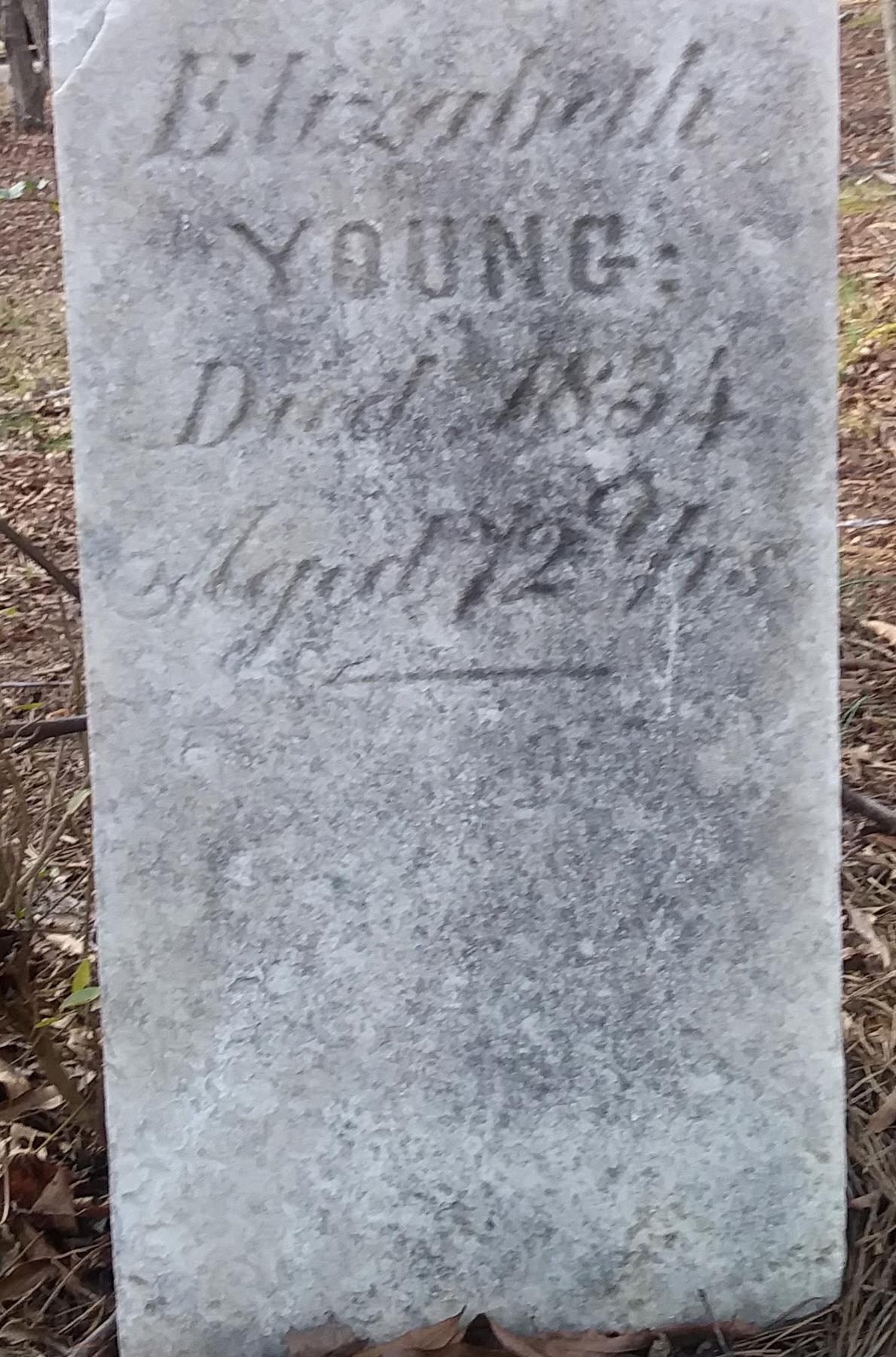 Family reunions come in all forms when you are heart-deep in genealogy: DNA matches, brick-wall breakthroughs, friend-requests from long lost cousins. This week, my tree had the benefit of such an unexpected reunion, in rather a unique form: an ancestor’s grave and a tombstone that had rolled three states away!

One section of Greene Connections is devoted to identifying area cemeteries. Many volunteers contribute regularly to posting photos and improving listings via this section’s specific links to FindaGrave.com. When a contributor offers suggested edits to a grave listing on the site, the volunteer managing the grave’s page receives an email. Such an email arrived last week with an unusual entreaty. The volunteer advised that he had added a tombstone photo to the entry for Elizabeth Young in Mt. Zion Cemetery, which is located in Castile, Morgan Township, Greene County, Pennsylvania. However, this was not an ordinary image addition. I had visited the graveyard looking for that very stone in 2013 and found it to be missing. The volunteer explained why that had been the case. Elizabeth’s memorial had been photographed by him, not in Pennsylvania where she rests, but in North Carolina, where it graces the yard of a friend! The stone had been found abandoned in a ditch with other markers, while the current owner was passing through Pennsylvania. Finding it in good condition, it was rescued. Not knowing where it belonged or why it had been so neglected, it was resurrected in it’s new home.

The Find a Grave volunteer photographed it and searched for a listing that matched the criteria presented in the inscription as well as a relevant location. His note to me was to ask if I agreed with his conclusion that this stone and my Elizabeth Young posting were a match.

Elizabeth Young, was not just any entry in my work on the site. She is my 7th-great-grandmother!

When James and Dorothy Hennen recorded the inscriptions at Mt. Zion in 1977, Elizabeth’s stone was next to that of her daughter Mary (Young) McGinnis and Mary’s husband Joseph McGinnis. Joseph and Mary are my 6th great-grandparents. This couple is often mixed up and misrepresented in McGinnis family trees because another Joseph McGinnis had lived in the same era, though with different geography and family; that Joseph’s heirs have an unfortunate habit of linking him as the son of John McGinnis and Sarah Clark, pushing my neglected ancestor, the proven child of John and Sarah, out of existence. As such, I was anxious to document and photograph these three stones to show some physical proof in addition to my research, that Joseph and Mary had lived.

As is custom in my family tree, upon reaching the row of stones, I found mostly grass. Only Mary (Young) McGinnis still has a marked grave.

Fortunately, the Hennen’s fine work provides a record of exactly what each stone said. Accordingly, I created Find a Grave entries with the Hennen’s notes for each Elizabeth and Joseph, so that they could be linked to the family and given representation of their known burial locations.

Now then, there was at least an inscription to match to the volunteer’s photo submission. It was exact!

Based on the geography of the found stone and the matching inscription, we feel assured that this is my Elizabeth’s marker. Whether or not we will try to arrange for her memorial to be brought home is now a pending consideration, but it is very wonderful and incredible to have reunited the person and the marker that remembers her in this way for now!

This is the new text posted on her Find a Grave site:

Hennen recorded tombstone data in Mt. Zion Baptist Cemetery in 1977. When the present researcher, Candice Buchanan, visited the cemetery 8 June 2013, this tombstone could not be located. Based on Hennen’s list of graves, the stone should have been beside Mary McGinnis (nee Young), who was most likely her daughter. While Mary’s stone was located, neither Elizabeth’s, nor Mary’s husband Joseph McGinnis’s stones were found, though they should have been together. In 2018, researcher Terrence McManaway contacted Buchanan with a tombstone photo matching exactly to the Hennen’s inscription for Elizabeth Young. The stone had been found abandoned in a ditch in Pennsylvania, thence removed to a location in North Carolina where it is still located.